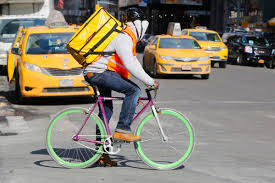 For as It’s pretty simple to call  restaurant  to order some food. It’s  about two minutes of our time,

But for other people, it’s a sign to start a hard job.

Delivery means that  bike delivery guy must look at the time and also to fight with the big traffic jams.

Delivery is about  is one of thousands of restaurant workers who are responsible for your gastronomical delight.

He delivers meals to hungry NYC residents by way of his bike,  and also spending approximately 40 hours of his week transporting orders for S’MAC, a New York City restaurant that specializes macaroni and cheese dishes.

Very often bike being stolen, Reported bike theft in New York City has increased by nearly 70 percent in the past four years.

Delivery men also pay for  his oven, bike lock, in  the case of minor bike repairs  delivery man’s doing it himself or with colleagues. For larger repairs, delivery men have to take his bicycle to the shop . For a bike delivery real money comes in the form of tips. Also, tips are some kind of stimulation for delivery men, to do his job best he can.

As a result they maybe doing his job with more love since they get extra money.

Bike delivery- let’s respect for the jobs they do!

Delivery men says he usually receives $2-$4 in tips per order, averaging some $200-$300 in tips each week. Average national tip as 13.9 percent per order, with NYC falling below average at 13.1 percent. Next time you see on the streets of NYC bike delivery, let’s respect for the job they do. It’s not just cycling as recreation,  there is a lot of effort invested, their own money, with that, let’s keep that in mind the next time they knock on our door.

What you did think about our bike delivery jobs article? Rate it and let us know!